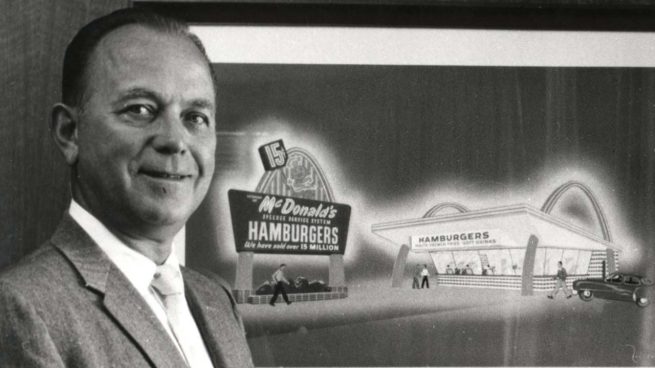 Born in 1902, Ray Kroc showed business instincts from a young age as he continuously set up lemonade stands and sold what he could afford to buy. He was determined and had a huge work ethic. At age 15, he lied about his age so he could become an ambulance driver for the Red Cross. The war ended before he could finish his training, so he moved onto being a paper cup salesman and a pianist.

If we fast-forward to the age of 52, in 1954, Ray had walked into a small restaurant run by the McDonald’s brothers, Dick and Mac. He was there to fulfill their need for multi-mixers, which Kroc was selling. He was impressed at how their refined, limited menu allowed them to specialize and deliver a great service. After all, they only sold burgers, fries, and beverages and they had been running since 1940. Kroc pushed for a chain of their restaurants where he would be the franchising agent and receive a cut of the profit. One year later, McDonald’s Corporation was formed and 5 years later, he had bought the exclusive rights to the McDonald’s name – he owned it all and of course, went on to become worth $600 million before passing away in 1984 from heart failure.

The first thing that comes to mind is that he took the long road to success. There appears to be a gap between a child setting up lemonade stands to a 50-year old creating perhaps the world’s biggest corporation. Well, that’s because he didn’t have an awful lot of huge success. He explored working as a musical director, pianist, real estate salesman and became the Midwestern sales manager at Lily-Tulip Cup Company. Just before he walked into Dick and Mac’s burger joint, Ray had come into contact with Earl Prince, who invented the machine that could generate 5 milkshakes at once. Ray put all his effort into selling those.

The personality of Ray Kroc

It was his stubbornness and perseverance that rewarded him in the end, though. Early on in McDonald’s growth, Kroc allegedly didn’t want to hire anyone with an MBA. This is because college education did not teach competitive tenacity – which he clearly understood to be the reason why he had become successful himself. This says a lot about Kroc, who was extremely hands-on and didn’t even like dealing with secretaries as he wanted people to be direct with him. Kroc’s personality remained the same, but success found him.

He was also known for his ruthlessness. The McDonald’s brothers tried to keep their original restaurant, to which Kroc refused and demanded they change their name. Kroc ended up going back on the agreement to pay the McDonald’s brothers their 0.5% royalties, as well as opening up a new McDonald’s right around the corner from the brother’s fast-food joint, which was forced to close six years later.

There are tons of lessons to be learned from Kroc – ones we should try to emulate, ones we should try to avoid and ones we can debate over their value. Kroc certainly doesn’t formulate a great ethical framework for business. Being vindictive and utterly uncompromising to the two founders of McDonald’s, who founded a long-serving humble family business, was unnecessary. However, it’s likely that without his uncompromising approach, he would have never made the most successful restaurant the world has ever seen.

There is no doubt that Kroc had a vision of that hamburger joint the second he walked in. He knew he had seen a great model, and that the model could be replicated. That was the key point: it could be replicated. If Kroc settled with just expanding this store, maybe opening a few more branches, then it could easily be copied by others. Instead, Kroc worked on franchising for McDonalds, the business (not just a restaurant). He didn’t want to manage that store he walked in, he wanted to understand the process, capture it, and duplicate it as many times as he can across the country. He was closer to being a real estate lease-king than he was a restaurant manager.

Whilst controversial, his boldness can still be admired and used as a source of inspiration. Kroc networked well and he grabbed opportunities when they came. His business strategy was very much in his own control and he kept following his vision. McDonald’s wasn’t an easy road – they weren’t making that much money even when 100 stores were open – but he persevered and adapted on his own terms.

McDonald’s was not a means to an end, either. If becoming wealthy was Kroc’s main goal, he wouldn’t have become a billionaire. He would have taken his foot off the gas within a few years when the restaurant served its 1 millionth burger. In the movie, The Founder, his wife asked “when is enough going to be enough for you?”, to which Kroc’s character replies, “Honestly, probably never”. This is the burning ambition that is required to fuel entrepreneurs. It isn’t necessarily the business strategy that can be learned from Kroc, although McDonald’s is certainly an inspiration, but rather his showcase of how personality prevails and business spirit.

Do you want more?

If you like reading this kind of article, be sure to read these 3 impressive entrepreneur stories. Want even more? We have written entire posts dedicated to Kim Dotcom, Bernard Groves and Jam Koum.