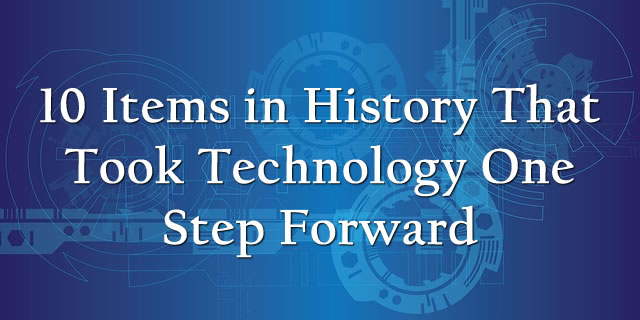 Once every generation there is a new tech gadget that changes the face of that generation. Competition forces incremental improvements until the next boundary-pushing creation is made. We see this things everyday with startups that do great things. But this article will go through 10 technological items that had a huge impact on our lives and the industry itself.

In 1973, Motorola facilitated the first public mobile phone call ever to its close competitors, AT&T. Fast forward to 1984, and the Dynatac 8000x was released, marking the first ever portable phone for mass consumption. It may have weighed around 2 pounds, but it was still somewhat popular, and was the catalyst for the bright future of cellular phones.

Whilst Epson’s HX-20 was the first to market 2 years prior, it hadn’t made much of an impact on the mass market, partly due to its tiny display screen. The TRS-80 however had a much larger LCD display, at 240 by 64. With no internal storage available a floppy disk was required, yet still had a multitude of in-built applications such as a scheduler and text editor.

Portable music seems like a somewhat recent phenomenon, but the Sony Discman introduced in 1984 was a big part in the transition from cassettes to CDs. Listening to portable CD players grew to hold a monopoly on music format in the US for a significant period of time thereafter.

The Kodak camera was revolutionary in its own right. It was the the first portable camera that was affordable to everyone, at a cost of $1. The leather and cardboard camera was also extremely easy to use, making cameras a common gadget for the public, and as a result popularised the term “snapshot”.

TomTom was perhaps the most successful company in taking advantage of America’s decision to open up its GPS network system. Very quickly at the turn of the century, we went from maps to having a voice in the car telling us the quickest route. The effect on transportation companies operations was inevitably a game-changer, too.

What the Kodak did for cameras, iPhone did for phones… And cameras! The iPhone initially took the world by storm with its endless capacity for independent applications and touch screen userbility. It would eventually become the reason for society’s shift from the designated cameras to smartphones, too, with instant shareability. The iPhone absolutely paved the way for the dominance that smartphones hold over our daily lives and our dependence on them.

Designed by a gamer himself, the Oculus Rift was designed to take video games to the next level of immersion. With an incredible wide field of view, high res display and a reasonable price, it was no real surprise that the company got acquired quickly by Facebook for around $2 billion.

Perhaps an unintended consequence from the Oculus Rift and VR in general is that it is now being used for mental health, such as treating phobias, and even soldiers with PTSD.

The Nest Thermostat, developed by Tony Fadell, is sharing out the huge benefits of machine learning to our homes. In 2011, the Nest Learning Thermostat was the first smart device for the home that went mainstream. The thermostat learns from previous data of one’s temperature patterns of their home, and seeks to predict and regulate the home accordingly. This kind of automation of daily house-tasks will continue to have a greater impact on our home lives.

Chinese firm DJI is a pioneer of drones. The DJI Phantom quickly garnered attention from hobbyists as a groundbreaking new gadget, ever since its 2013 release. Like the Oculus Rift, though, there have been some unprecedented uses as a result of the technology, such as the San Diego’s bomb squad adding DJI drones to its arsenal.

The Google Glass may not have took off, and it certainly didn’t escape its fair share of criticism. What the Google has done however, has paved the way for augmented reality. It was a big signal to the public that we are bridging the gap between our consciousness and artificial intelligence. The latest version of Google Glass for example, is attempting to facilitate (through an app) the ability of understanding spoken language, and providing a verbal response.